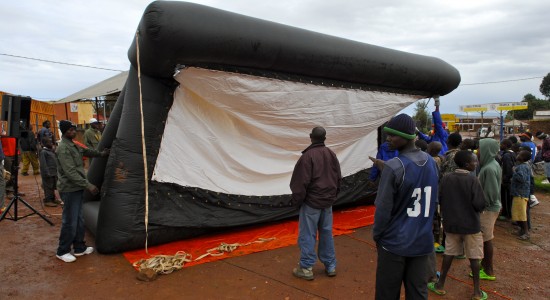 Set in the land of a thousand hills, this film follows the blossoming Rwandan film industry - Hillywood. As the country is still healing from the wounds of an ethnic and cultural genocide 20 years ago, cinema has become a way for artists to express themselves and create discussion and debate. This innovative documentary explores the people at the heart of the industry and the valuable role cinema can play in healing a nation. Through this film we discover the pioneers who brought the industry to life, including Eric Kabera, who will be in attendance at AiM.

Through this film we discover the pioneers who brought the industry to life, including Eric Kabera, who will be in attendance at AiM.

Eric Kabera was born in Zaire (now the Democratic Republic of the Congo) in 1970. He was living in the DRC when the Rwandan genocide started in April 1994 but was still deeply affected by the tragedy. After 1994, Eric started the film production company, Link Media Productions, which produced the first feature-length film on the Rwandan genocide (100 days, directed by Nick Hughes). Motivated by the lack of human resources in audiovisual production in Rwanda, Kabera founded the Rwanda Cinema Centre (RCC) in 2001 with the intention of training and facilitating filmmaking in Rwanda. Kabera’s directorial debut, Keepers of Memory, an unforgettable documentary released ten years after the Rwandan genocide is screening at Africa in Motion this year. Kabera’s contributions to films also include co-producing the critically acclaimed film Africa United, and a number of other short films and documentaries made about Rwanda. He is currently working on his latest documentary Intore, which is set to be released early next year.

Eric Kabera’s visit has been generously supported by the School of Arts and Humanities at the University of Stirling.